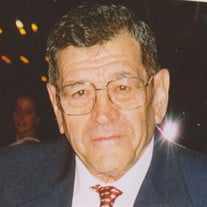 Anthony “Tony” Barba, 92, of Solvay, passed away peacefully at The Centers at St. Camillus on January 8, 2018, on what would have been his mother’s 123rd birthday. Tony was born on July 25, 1925 in Solvay, NY to Leonardo and Mary Malone Barba. He was a lifelong resident of Solvay. Tony graduated from Solvay High School and then entered the United States Navy, where he served on the USS Chicago in the Pacific during World War II. Upon his honorable discharge from the Navy, Tony began work at Allied Chemical (then called Solvay Process) in Solvay. Tony retired from Allied Chemical after nearly 40 years of service. Tony was a longtime member of the Solvay Tigers. Tony loved hunting, fishing, and camping in the Adirondacks, particularly at Carry Falls Reservoir, but his biggest love was his love for his family. Tony was predeceased by his parents, his brother Richard, and his sisters Jane Romano Mangano and Mary Quattropani. He is survived by his wife of 67 years, Elsa Salvaterra Barba; a son, Thomas (Doreen) Barba; a daughter Cindi Barba (Dennis Coon); two grandchildren: Brandon Barba (Colleen) and Kristie Kitchner (Parry); sisters-in-law: Irene Salvaterra and Louise Inga Salvaterra; four great-grandchildren: Sofia Barba, Anthony Barba, Giada Kitchner, and Lucio Kitchner. He is also survived by several nieces and nephews. Family and friends may call from 2 to 4 pm Sunday at BAGOZZI TWINS FUNERAL HOME, 2601 Milton Avenue. A Memorial Mass will be celebrated 9:30 am Monday at St. Cecilia Church, 1001 Woods Rd. Private burial will follow in Assumption Cemetery. The family would like to thank the staff at St. Camillus, particularly the staff on the third floor, for their care and compassion in taking care of Tony for the past year. In lieu of flowers, the family requests that donations be made in his memory to the Food Pantry at St. Cecilia’s Church, 105 Stanton Ave, Solvay, NY 13209. Please offer online tributes for Tony at www.bagozzitwins.com.

The family of TONY BARBA created this Life Tributes page to make it easy to share your memories.

Anthony “Tony” Barba, 92, of Solvay, passed away peacefully at...

Send flowers to the BARBA family.