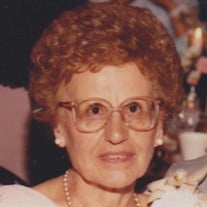 Theresa A. (Lizzi) Bandoblu, 93, of Syracuse, passed away peacefully on Thursday, January 18, 2018 at St. Camillus Health and Rehabilitation Center. Theresa was born, raised, and lived in the West End of Syracuse for most of her life. Theresa graduated from Vocational High School. She was employed by Associated Laundries of America, Syracuse China, and later by General Electric before raising her three children full time. Her specialties were her homemade meatballs and sauce. She was a communicant of St. Brigid and St. Joseph Roman Catholic Church and a member of its Altar & Rosary Society. Her greatest joy was to spend time with her family. She enjoyed trips to Las Vegas, and Saratoga Race Track. She was an avid Yankees fan and SU Basketball Fan. A special thank you goes out to her home health care providers, and the staff of St. Camillus (B-Unit), as well as the staff in the Oasis Dining Room. She was predeceased by her parents Gaetano (John) and Rose Lizzi, her husband of 67 years, James F. “Jack” “Giacomo” Bandoblu, sister, Angela Miuccio, brothers, Anthony, Michael and Alfred Lizzi and brother-in-law, Michael J. Bandoblu. . She is survived by her two sons, John (Nancy) Bandoblu, James M. (Dee) Bandoblu, of Syracuse, her daughter, Jacqueline (Thomas) Trytek, of Marcellus, her grandchildren, Audra (Jeff) MacCollum, Jennifer (Dr. Stephen) Knohl, James M., Jr. (Shannon) Bandoblu., Michael (Janelle) Bandoblu, Emily, Caroline and Thomas Trytek.; and her great-grandchildren, Nicholas and Zachary MacCollum, Connor and Caitlyn Knohl, Giacomo and Luciana Bandoblu. Also surviving are her brother, David Lizzi, her sister Rosemary (Louis) Letizia, daughter-in-law, Karen Bandoblu and several nieces, nephews, and cousins. Funeral services will be conducted on Tuesday, January 23 at 9:15 am in BAGOZZI TWINS FUNERAL HOME, and at 10 am in St Ann’s Church in Taunton, where a Catholic Funeral Mass will be celebrated. Burial will follow in Greenlawn Memorial Park, Warners. Calling hours will be from 4 to 7 pm Monday, January 22 at BAGOZZI TWINS FUNERAL HOME, 2601 Milton Ave, Solvay, New York. Contributions may be made in her memory to Golisano Children’s Hospital, 750 E. Adams St, Syracuse, NY 13210. Please offer online tributes for Theresa at www.bagozzitwins.com.

Theresa A. (Lizzi) Bandoblu, 93, of Syracuse, passed away peacefully on Thursday, January 18, 2018 at St. Camillus Health and Rehabilitation Center. Theresa was born, raised, and lived in the West End of Syracuse for most of her life. Theresa... View Obituary & Service Information

The family of THERESA (LIZZI) BANDOBLU created this Life Tributes page to make it easy to share your memories.

Theresa A. (Lizzi) Bandoblu, 93, of Syracuse, passed away peacefully...

Send flowers to the BANDOBLU family.