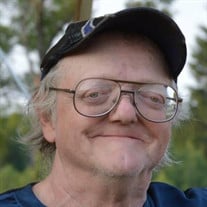 Robert A. Metcalf Sr., a landscaper for over 40 years of his life and a family man unexpectedly died of COVID-19 late December 4th, 2020 at the age of 66 at his home. He was survived by his wife; Phyllis A. Metcalf (Sanchez), children; Robert Metcalf Jr., Sarah Steinbrecher (Metcalf), Shannon M. Metcalf, Joan J. Metcalf, siblings; Steve Metcalf, Kathy Button (Metcalf), Martin Metcalf, Karen Parker (Metcalf), daughter-in-law; Carrie Metcalf, son-in-laws; James Steinbrecher and Justin Metcalf (Townsend), and four grandchildren. He is predeceased by his parents; mother Joan M. Metcalf (Niles), father Nathan William Metcalf Jr., son Timothy J. Metcalf., and mother of his first two children Rosemary Metcalf (Smith). Robert was born in Cortland, New York January 13th, 1954. He was raised by both of his parents with his four siblings. He served two and a half years in the Army and was released on an honorable medical discharge. Robert met Phyllis during the summer of 1989 and quickly fell in love. It wasn’t until 6 months later on December 3rd, 1989 that the two officially got together. They went on to have three beautiful children; a daughter in 1990, a son in 1991, and a daughter in 1997. He then married the mother of his youngest three children June 20th, 1998. Robert idolized three things; God, his family, and his country. He was an amazing husband, father, and grandfather. He loved watching movies and playing games with his wife, playing with his kids, taking his family to the river to swim as well as taking them on trips to new places. He was the type of man that would give his loved ones everything he had if it would make them happy. His favorite pastimes were watching movies and shows, working out every other day, playing video games (especially any that had to do with golf), playing cards and board games as well as outdoor games. He always loved the countryside and yearned to get back to it as soon as he could. Robert’s funeral services were held at BAGOZZI TWINS FUNERAL HOME at 9:30 A.M. on Wednesday, December 16th, 2020. Military Honors and burial were held at 9:30 A.M. on Friday, December 18th, 2020 in the Pitcher Congregational Church Cemetery (Brookside) in Pitcher, NY. Robert is such a beloved man and he will truly be missed by all of his surviving family and friends. We hope that he finds his way up to Heaven so he can be with his mother, father and son as well as his many other family members and pets who passed away before him.

Robert A. Metcalf Sr., a landscaper for over 40 years of his life and a family man unexpectedly died of COVID-19 late December 4th, 2020 at the age of 66 at his home. He was survived by his wife; Phyllis A. Metcalf (Sanchez), children; Robert... View Obituary & Service Information

The family of ROBERT A. METCALF SR. created this Life Tributes page to make it easy to share your memories.

Send flowers to the METCALF family.