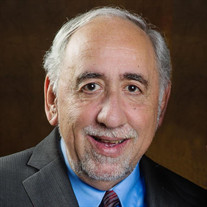 Richard “Dick” J. Simiele, beloved husband, father and grandfather, entered into eternal rest at Francis House at the age of 72. He leaves to cherish his memory his wife of 48 years, Angela (DeSantis) Simiele, and his children, Paula (Nathan) Charvella, of Amherst, Joseph (Sookie) Simiele, of Walnut Creek, CA, and Rosanne (Mark) Bellavia, of Hilton, and his beloved grandchildren, Mila, Vincent, and Cora Charvella, Gianna, Luca and Gino Bellavia and Salvatore Simiele, who brought so much joy to their “Papa”. Dick is also survived by his sister-in-law, Rosemary Simiele, of Solvay and his brother, Michael (Colleen) Simiele, of Cresco, Iowa, sister-in-law, Doris Henry, of NC and brother-in-law, Nicholas DeSantis, of Solvay; many nieces, nephews, and dear friends. He was predeceased by his parents Mary Grace (Bianchi) and Anthony Simiele, sister, Marie, and brothers, Patrick, Anthony and Robert. After graduating from Solvay High School, Dick graduated from the State University of New York at Fredonia, where he received his bachelor’s and master’s degrees in Music. Dick was a talented musician and music teacher. He played many instruments including clarinet, baritone and tenor saxophone and flute. He was part of the Stan Colella Orchestra and the Mario DeSantis Orchestra for 35 years. He taught instrumental music in the Cato-Meridian School District for 6 years and general music and choral music in the Baldwinsville School District for 26 years. As an educator, Dick used his humor and compassion to encourage his students in all their endeavors. He had a remarkable ability to connect with others and make everyone feel loved. During Dick’s tenure at Baldwinsville, he wrote 26 one-act musical plays, writing the script and composing the music geared toward his middle school students. To name a few – The Pasta Palace, Movin’ On Out, Boxsations and Potentiality. There were many colleagues who loved to be part of the production process, especially Terry Gerber, Laurie Dobmeier, Trish Hollis, Phil Sterling, Kathy Wallace, Bill and Dorothy Dwyer and Barb Stowe, and many more colleagues behind the scenes and on the stage. The Simiele family would like to thank the doctors, physician assistants, and nurses that cared for him over his illness, along with Pastor Jon Maselli of Community Tabernacle for his pastoral care. Family and friends may call from 4:00 – 6:00 PM Wednesday, March 9th at BAGOZZI TWINS FUNERAL HOME, 2601 Milton Ave, Solvay. Funeral services will be held 10:00 AM Thursday at Grace Assembly of God, 4220 Fay Rd, Syracuse 13219. Entombment will follow in Woodlawn Cemetery, Syracuse. Please share online tributes and memories at www.bagozzitwins.com.

Richard &#8220;Dick&#8221; J. Simiele, beloved husband, father and grandfather, entered into eternal rest at Francis House at the age of 72. He leaves to cherish his memory his wife of 48 years, Angela (DeSantis) Simiele, and his children, Paula... View Obituary & Service Information

The family of RICHARD "DICK" SIMIELE created this Life Tributes page to make it easy to share your memories.

Send flowers to the SIMIELE family.