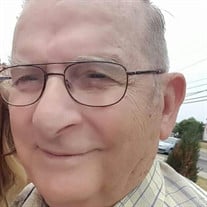 It is with great sadness that we announce the death of our father, Richard J. (Dick) Forger (affectionately known as “Pop”) of Solvay, after a short illness. Dick was born on December 28, 1926, to the late Garrison and Grace Forger and grew up in Solvay. At 16 he enlisted in the Army and served in Italy during WWII. Upon returning home he met and married the love of his life, Agnes Fitzpatrick and raised their 5 children in the house he built in Liverpool. On May 13, 2020 Dick and Agnes celebrated 70 years of marriage. Dick retired from New York Telephone after 40 years of service. He was a member of the Air National Guard at Hancock Field for many years. Dick and Agnes spent summers at their camp in Cleveland, NY and traveled to several states and countries during retirement. Dick also owned and trained quarter horses, flew his own private planes and built and sold Glass Hawk boats and ultralight aircraft. He was a man of many talents who will be greatly missed by many. Dick is survived by his wife of 70 years, Agnes, his children, Mathew Forger, of CA, Garry Forger, of AZ, Grace Ann (Colin) Ratliff, of MD and Theresa Forger, of Solvay. He is also survived by 9 grandchildren and 13 great-grandchildren, his sisters, Delores Fedrizzi, of Solvay and Marilyn, of MA and many nieces and nephews. He was predeceased by his daughter, Eileen Forger, his sisters, Arleta (Bill) Blowers, Arleen (Frank) Jerome, and Eleanor (Paul) Cooper. Friends and family may call from 4 to 6 pm on Tuesday at BAGOZZI TWINS FUNERAL HOME, 2601 Milton Avenue. A Mass of Christian Burial will be celebrated on Wednesday December 2nd at 9:30 am at St. Marianne Cope Parish - Cecilia Church, 1001 Woods Road, Solvay. Burial Services will be private. Face masks are required and NYS guidelines on distancing will be followed. Please share online memories and tributes at www.bagozzitwins.com.

It is with great sadness that we announce the death of our father, Richard J. (Dick) Forger (affectionately known as &#8220;Pop&#8221;) of Solvay, after a short illness. Dick was born on December 28, 1926, to the late Garrison and Grace Forger... View Obituary & Service Information

The family of RICHARD J. FORGER created this Life Tributes page to make it easy to share your memories.

It is with great sadness that we announce the death of our father,...

Send flowers to the FORGER family.