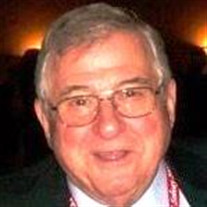 Reno Joseph Rudari lived life to the fullest in spirit, word, deed and faith. He was a man of great joy, who readily shared it with those around him; a man of great generosity and compassion; and a trusted friend, confidant, and colleague. Most... View Obituary & Service Information

The family of RENO J. RUDARI created this Life Tributes page to make it easy to share your memories.

Send flowers to the RUDARI family.