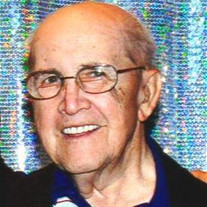 Paul Francis DiGiulio, 92, of Fairmount, passed away peacefully Wednesday, December 28th at home surrounded by his loving family. He was born in Solvay to the late Michael and Mary (LaManna) DiGiulio in 1924. He was a graduate of Solvay High School and a US Army Veteran, serving during World War II. Paul was a screw maker at Pass and Seymour for many years before retiring in 1989. He was a longtime communicant of Holy Family Church, a member of the Stanley B. Pennock VFW Post 2893, Solvay-Geddes Veterans Association, Solvay Seniors and a Special Deputy Sheriff for Onondaga County. He was proud to have traveled on the Honor Flight on two occasions. He was an avid bowler, loved spending time at his camp on the Seneca River, and a “deer hunter”. Paul was predeceased by his wife, Gloria (Cimini), son, Paul R. DiGiulio, sister, Rose Longo and brother, Floyd DiGiulio. He is survived by his son; Michael (Kathryn) DiGiulio, of Warners, 3 daughters; Maryann (Gregory) Lawrence, of Peoria, AZ, Diane Pealo, of Syracuse and Paula (John) Skiff, of Syracuse, 9 grandchildren; Gregory (Melissa), Melissa, Peter and Brandon (Tabbetha) Lawrence, Amanda Castro, Courtnay Pealo, Kristina (Justin) Bomgren, Erika Stanton and Paul DiGiulio, 10 great-grandchildren, brother; Michael (Nancy) DiGiulio, of Syracuse, “adoptive son”; Paul (Jamie) Husted, of Syracuse, many nieces nephews and cousins. Funeral services will be held 9:15 am Tuesday, January 3, 2017 at BAGOZZI TWINS FUNERAL HOME and 10:00 am at Holy Family Church, Fairmount, where a Mass of Christian Burial will be celebrated. The Rite of Committal will follow in Greenlawn Memorial Park, Warners. Family and friends may call from 4 to 7 pm Monday, January 2, 2017 at BAGOZZI TWINS FUNERAL HOME, 2601 Milton Avenue. In lieu of flowers, contributions may be made in his memory to Honor Flight, PO Box 591, Syracuse, NY 13209. Please offer online condolences at www.bagozzitwins.com.

Paul Francis DiGiulio, 92, of Fairmount, passed away peacefully Wednesday, December 28th at home surrounded by his loving family. He was born in Solvay to the late Michael and Mary (LaManna) DiGiulio in 1924. He was a graduate of Solvay High... View Obituary & Service Information

The family of Mr. Paul F. DiGiulio created this Life Tributes page to make it easy to share your memories.

Send flowers to the DiGiulio family.