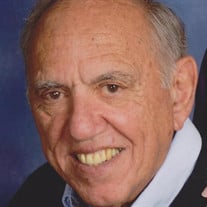 Patrick Simiele, beloved husband, father and grandfather, passed away peacefully at Francis House, on October 20, 2017, at the age of 80, with Rosemary, his wife of 58 years, and his family by his side. Pat enlisted in the Army after graduation, and served with the U.S. Army Security Agency as a cryptographer stationed in Frankfurt, Germany. His tour of duty allowed him to travel extensively throughout Europe. He retired from Allied Chemical, as Distribution Manager and from Lindner Publications. Pat was a member of the Syracuse Transportation Club, Geddes Veterans, and the Solvay Hilltop Social Club. He was dedicated to St. Joseph’s Hospital as a Eucharistic Minister, and was privileged to also volunteer at Francis House. In addition to being an avid Yankees and SU sports fan, Pat enjoyed bowling and golfing with friends. He especially enjoyed teaching his grandchildren how to play a “mean” game of poker. Pat leaves to cherish his memory his wife, Rosemary and their three daughters, Mary Therese (David) Van Nostrand, Anita (Larry) Hogan, and Carol (Jack) Antonacci, and his beloved grandchildren, the joys of his life, Nathan, Nicole, Ryan, Catrina, Eric and Kyle (Jillian). He is also survived by his brothers, Richard (Angela) Simiele of Lakeland, and Michael (Colleen) Simiele of Cresco, Iowa, and several nieces, nephews and cousins. Pat’s family wishes to thank the angels, too numerous to mention, at Francis House for the compassionate care they provided to him, and the doctors, nurses and staff in Unit 2-5 at St. Joseph’s Hospital, as well as Dr. Steven Connolly, for always caring about Pat. Family and friends are invited to call from 4 - 7 on Monday, October 23, 2017, at BAGOZZI TWINS FUNERAL HOME, 2601 Milton Avenue, Solvay, NY. Funeral services will be held at 9:15 a.m. on Tuesday, October 24, 2017, at BAGOZZI TWINS FUNERAL HOME followed by a funeral Mass in celebration of Pat’s life, at 10:00 a.m. in Holy Family Church, Fairmount, NY. Entombment will be in Woodlawn Cemetery Mausoleum. In lieu of flowers, please consider donations in Pat’s memory to Francis House, 108 Michaels Avenue, Syracuse NY 13208. Please offer online tributes for Pat at www.bagozzitwins.com.

Patrick Simiele, beloved husband, father and grandfather, passed away peacefully at Francis House, on October 20, 2017, at the age of 80, with Rosemary, his wife of 58 years, and his family by his side. Pat enlisted in the Army after graduation,... View Obituary & Service Information

The family of PATRICK A. SIMIELE created this Life Tributes page to make it easy to share your memories.

Send flowers to the SIMIELE family.