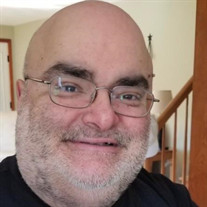 Matthew L. Cacossa, 57, of Solvay, passed away unexpectedly from complications of COVID and other prior health issues on May 11, 2022. Matt was a 1982 graduate of Solvay High School, and was listed in the book of “Who’s Who Among American High School Students”. He started working at Solvay Public Library while he was in high school, and worked there for over 20 years. Also while in high school he worked at Cavages Records as a sales clerk, and advanced to manager of the ShoppingTown Mall location in Dewitt. He continued working at those two jobs while attending Le Moyne College, where he graduated with two degrees, Psychology and Business Administration, in 1986. Upon graduation he worked for Bryant & Stratton, assisting high school students with college applications, grants, and financial aid. He worked for a short time with Comtech, and then Fay’s Drug Corporation Central Office, in the bookkeeping department. Thereafter he was hired by Niagara Mohawk (later National Grid) in 1989, working for over 30 years, beginning in the mailroom, moving into accounts payable, multiple temp jobs, customer service and then service dispatch department, where he retired from in 2020. Introduced to music at an early age by his sister, he was not just a collector of records but a voracious consumer of all styles of music (although anyone who knew him knows his favorite band was the Beatles). He attended countless concerts, locally and out of town, all with friends and family, and all were memorable to him. Matthew was devoted to his family. He spent hours with his nephews, John and Paul, sharing his love of music with them, since they were very young. He would take them to various records stores and later many concerts. He spread that love of music to his great nephews and niece. Matt was predeceased by his mother, Marie Estelle (Veri) Cacossa. He is survived by his sister, Audrey (Jack) Kelly, of Solvay, nephews, John (Jennifer) Kelly, of South Carolina, and Paul Kelly, of Solvay, great nephews, Collin, Brandon, and Evan, great niece Nora, many cousins, and too many friends to count. Family and friends may call from 4:00 – 7:00 PM Thursday, May 19th at BAGOZZI TWINS FUNERAL HOME, 2601 Milton Ave, Solvay. A Mass of Christian Burial will be celebrated 10:00 AM Friday, May 20th at Holy Family Church, 127 Chapel Dr, Syracuse. Entombment will follow in Greenlawn Memorial Park, Warners. In order to honor his life, Matthew’s sister requests all in attendance wear their favorite band/music/concert t-shirt to calling hours and services. Please no flowers. In lieu of flowers, donations may be made in his memory to St. Jude Children’s Research Hospital, 501 St. Jude Place, Memphis, TN 38105 or Joseph’s House for Women, Inc., 802 Court Street, Syracuse, NY 13208. Please share online memories and tributes at www.bagozzitwins.com.

Matthew L. Cacossa, 57, of Solvay, passed away unexpectedly from complications of COVID and other prior health issues on May 11, 2022. Matt was a 1982 graduate of Solvay High School, and was listed in the book of &#8220;Who&#8217;s Who Among... View Obituary & Service Information

The family of MATTHEW "MATT" L. CACOSSA created this Life Tributes page to make it easy to share your memories.

Matthew L. Cacossa, 57, of Solvay, passed away unexpectedly from...

Send flowers to the CACOSSA family.