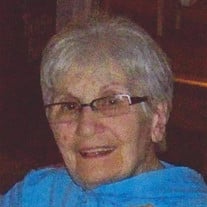 Josephine M. (Guinta) Maino, age 95, formerly of Syracuse, passed away Thursday at Brookdale Memory Care Facility in Orlando, FL. She was born in Syracuse to the late Nicholas and Rose (Curro) Guinta in 1922. She was a former owner of an apartment house on Castle St., which is now part of Interstate 81, where she rented rooms to Syracuse University Professors and graduate exchange students. Josephine was employed as a sales representative for various retail and clothing shops in the Syracuse area including Dey Bro.’s Department Store. She was a successful business woman, owning beach front property in Oswego, where the Nine Mile Nuclear Plant now stands, and property along the seaway trail in Henderson Harbor that was once owned by the founders of Genesee Brewing Co., Louis A. Wehle. “Josie”, as her family and friends called her, was known for her homemade pizza, fried dough, baking homemade pies and spoke nine dialects of the Italian language. She was predeceased by her husband of 37 years, Louis A. Maino in 1986 and a daughter, Rosemarie A. Maino in 1999. Josie is survived by her children; Louis R. (Cindy) Maino, of Winter Garden, FL, Carol J. (Robert) Avery, of Woodlands, TX, Thomas A. (Lisa) Maino, of Apollo Beach, FL, and Robert A. (Janice) Maino, of Richmond, VA, 10 grandchildren; Melissa A. and Allison M. Maino, Christopher, Kyle, Michael and Jon Avery, Corey Maino, Cassidy, Promise and Madison Maino, 2 great grandchildren, Harper and Ellie and many nieces and nephews. Funeral services will be held 8:45 am Friday at BAGOZZI TWINS FUNERAL HOME and 9:30 am at St. Cecilia Church, where a Mass of Christian Burial will be celebrated. The Rite of Committal and burial will follow in Greenlawn Memorial Park, Warners. Family and friends may call from 4 to 7 pm Thursday at BAGOZZI TWINS FUNERAL HOME, 2601 Milton Avenue. In lieu of flowers, contributions may be made in her memory to St. Jude Children’s Research Hospital. Please offer online tributes and memories for Josephine at www.bagozzitwins.com.

Josephine M. (Guinta) Maino, age 95, formerly of Syracuse, passed away Thursday at Brookdale Memory Care Facility in Orlando, FL. She was born in Syracuse to the late Nicholas and Rose (Curro) Guinta in 1922. She was a former owner of an apartment... View Obituary & Service Information

The family of JOSEPHINE M. (GUINTA) MAINO created this Life Tributes page to make it easy to share your memories.

Send flowers to the MAINO family.