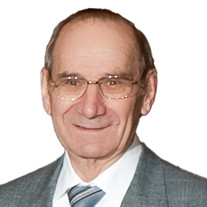 Joseph L. Fedrizzi, 92, of Solvay, passed away peacefully surrounded by his family Friday, January 21, 2022 at Upstate Community Hospital in Syracuse. Born January 5, 1930 to the late Louis J. and Constance (Armani) Fedrizzi, he was a lifelong resident of Solvay. Joe retired from Allied Chemical as a welder after 35 years of dedicated service. He was a graduate of Solvay High School. Joe loved spending time with his family and was a beloved husband, father, papa, and great-grandfather. He took great pleasure watching and following his children, grandchildren and great-grandchildren as they participated in their school, after-school activities and sporting events resulting in many trips which took them all over the northeast, Canada and Alaska. He and his wife enjoyed their travels to Austria, Italy, Colorado, Florida, and a Western Caribbean cruise. His hobbies: hunting, fishing, especially fly fishing at Nine Mile, tying his own flies, skating, playing hockey with the rink rats and woodworking brought him happiness and contentment. Joe loved the NY Yankees and was an avid NHL hockey fan cheering on his favorite teams, the NY Rangers and LA Kings. A highlight in Joe’s life was getting the opportunity to spend the day not once but twice with the NHL Stanley Cup. Joe spent many years coaching and refereeing hockey at the NYSF Coliseum, teaching welding at BOCES night school, was a member of the Air National Guard, Solvay Tyrol Club, and a lifelong communicant of St. Cecilia’s Church. Joseph was predeceased by his brothers, Herman and Louis, sisters-in-law, Frances and Ruth, nephew, John and great niece, Theresa. Joseph is survived by his wife of 71 years Delores (Forger) Fedrizzi and their four children, Linda Smart, Mark (Diane) Fedrizzi, Doug (Lynn) Fedrizzi and Karen (John) Lotito; 10 grandchildren, Tiffany, Tracy, Eric, Brent, Erin, Josh, Melissa, Matthew, Nicholas and Ashley; 16 great-grandchildren, brother, Carl Fedrizzi, sister-in-law, Rose Fedrizzi and a large extended family. The family would like to extend their thanks to the wonderfully skilled and compassionate staff at Upstate Community Hospital. Family and friends may call from 4 to 6 pm on Thursday, January 27th at BAGOZZI TWINS FUNERAL HOME, 2601 Milton Ave. His Mass of Christian Burial will be celebrated 9:30 am Friday January 28th at St. Marianne Cope Parish-St. Cecilia Church, 1001 Woods Rd, Solvay. Burial will follow in Greenlawn Memorial Park, Warners. In lieu of flowers, contributions may be made to the Solvay-Geddes Community Youth Center, 1010 Woods Road, Syracuse, NY 13209. Please share online tributes and memories at www.bagozzitwins.com.

Joseph L. Fedrizzi, 92, of Solvay, passed away peacefully surrounded by his family Friday, January 21, 2022 at Upstate Community Hospital in Syracuse. Born January 5, 1930 to the late Louis J. and Constance (Armani) Fedrizzi, he was a lifelong... View Obituary & Service Information

The family of JOSEPH L. FEDRIZZI created this Life Tributes page to make it easy to share your memories.

Send flowers to the FEDRIZZI family.