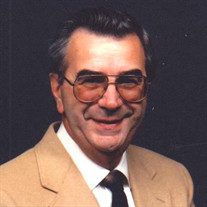 John M. “Chick” Giachetti, 84, of Camillus, passed away peacefully Saturday at home surrounded by his loving family. John was the high school sweetheart of his wife of 64 years Rebecca “Becky” Housman. It was a true love story as he was the Solvay High School Class of 1952 President and she was playing hard to get! John did get the girl and they lived a wonderful love-filled life together. John had two daughters Nancy and Lynn that were the center of his universe, four grandchildren, Christina, Johnny, Amanda and Tim that he adored beyond belief and two great-grandchildren Leah and Fiona. John was very active within the local, county and state volunteer fire service. He was an active member of the Fairmount Fire Department for over 30 years and served as Chief from 1981-1984. John also served was President of Western Section Line Officers Assoc., President Onondaga County Volunteer Firemen Assoc., President Onondaga County Fire Chiefs Assoc. and was very active within the State Volunteer Fire Association (FASNY) where he held several posts. In addition to his dedication to the fire service has he was also a member of Town of Camillus Planning Board. John was an active member of the committee in establishing the Burn Treatment Center at Upstate Medical Center in 1979. He was instrumental in constructing the first House of Hazards at the New York State Fair in 1980. Which stood for over four decades at the fair. Dedicated to his children John was a very active member in the 1970’s of the West Genesee Wildcat Marching Band Parent Association. Both of his girls were members of the Marching Band and Winter Guard and he chaired many fund-raising events to support the organization. John was an avid bowler and a member of the ABC 700 Club. Later in life he enjoyed a good round of golf. He loved Syracuse University Sports, watching his Pittsburgh Steelers and PGA. He loved to travel with his wife and they made many happy memories together. John retired from Bristol Myers Squibb after 35 years. His family wishes to extend a special thank you to Dr. Page and his staff for their exceptional care and comfort. John is survived by his loving wife Rebecca “Becky”, daughter Nancy (Donnie) Mandurano, of Oswego, four grandchildren, Christina Letterle, of Oswego, John Letterle, of Liverpool, Amanda Powers, of Chicago, IL and Timothy Powers, of Columbus, OH and two sweet great-grandchildren, Leah and Fiona! He was predeceased by his parents, Carl & Frances (Patalino) Giachetti, brother, Richard Giachetti and his daughter, Lynn Marie Powers. Family and friends may call from 4 pm to 7 pm Wednesday at BAGOZZI TWINS FUNERAL HOME, 2601 Milton Avenue, Solvay. Funeral services will be held 11:45 am Thursday at BAGOZZI TWINS FUNERAL HOME and 12:30 pm at Holy Family Church where a Mass of Christian Burial will be celebrated. Entombment will follow in Greenlawn Memorial Park, Warners. In lieu of flowers, donations may be made in his memory to the Fairmount Fire Dept. Benevolent Association, 4611 W. Genesee St, Syracuse, NY 13219. Please share online memories and tributes at www.bagozzitwins.com.

John M. &#8220;Chick&#8221; Giachetti, 84, of Camillus, passed away peacefully Saturday at home surrounded by his loving family. John was the high school sweetheart of his wife of 64 years Rebecca &#8220;Becky&#8221; Housman. It was a true love... View Obituary & Service Information

The family of JOHN "CHICK" GIACHETTI created this Life Tributes page to make it easy to share your memories.

Send flowers to the GIACHETTI family.