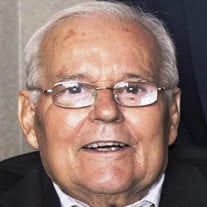 John Francis Brusa, 85, of Syracuse NY passed away on Tuesday. He was born on January 17, 1934 in Syracuse NY to Giuseppe and Theresa Brusa. A native of Solvay, John graduated from Morrisville College. He was a US Army Veteran and served in Korea. In 1960, he co-founded J&T Automotive, Inc. in Syracuse, NY where he worked for over 39 years as co-owner. John lived life to the fullest and enjoyed fishing, boating, sports and most of all, spending time with his family. John was a devout Catholic and a leader in the Charismatic Renewal whose passion was bringing others to a personal relationship with Christ. He helped lead numerous Life in the Spirit Seminars in the Diocese of Syracuse and beyond. On September 28, 2019, even in poor health, he led the Life in the Spirit Seminar at the CNY Marian Center. John’s success in business allowed him to help others through generous financial support of various charities, institutions and the Church, both locally and globally. John is predeceased by his first wife of 34 years, Theresa A. (Lattanzio) Brusa and his stepdaughter, Laura McCarthy-Fried, sister, Rose League and nephew, Rusty League. He is survived by his wife of 23 years, Teresa (McCarthy), 7 children, Rose (Thomas) Morgan, of Adams Center, NY, Maria (Richard) Lee, of Marcellus, NY, Joseph (Jacqueline) Brusa, of Huntersville, NC, Patrick (Cheryl) Brusa, of Syracuse, NY, Elizabeth Brusa, of Syracuse, NY, John (Joanne) Brusa Jr., of Solvay, NY, Elena (Michael) Sewall, of Camillus, NY; 4 stepchildren, John (Doreen) McCarthy, of Manlius, NY, Kitty (Robert) Cowan, of Cazenovia, NY, James McCarthy, of Syracuse, NY, Maureen (Richard) Colson, of Syracuse, NY; stepson-in-law; Scott Fried, 25 grandchildren, 8 great grandchildren, 5 step-grandchildren; also survived by his cousin, Norma (Plotti) Malecki of Crestview Hills, KY, brother-in-law, Anthony (Sophie) Lattanzio, of Apex, NC, several nieces and nephews, and several relatives in Italy. Family and friends may call from 4:00 to 7:00 pm Friday at BAGOZZI TWINS FUNERAL HOME, 2601 Milton Avenue. A Mass of Christian Burial will be celebrated 9:00 am Saturday at Holy Family Church, Fairmount. The Rite of Committal and burial will follow in Assumption Cemetery, Syracuse. In lieu of flowers, donations may be made in his memory to Joseph’s House for Women (www.jhfw.org). Please share online tributes and memories at www.bagozzitwins.com.

John Francis Brusa, 85, of Syracuse NY passed away on Tuesday. He was born on January 17, 1934 in Syracuse NY to Giuseppe and Theresa Brusa. A native of Solvay, John graduated from Morrisville College. He was a US Army Veteran and served in... View Obituary & Service Information

The family of JOHN F. BRUSA SR. created this Life Tributes page to make it easy to share your memories.

John Francis Brusa, 85, of Syracuse NY passed away on Tuesday....

Send flowers to the BRUSA family.