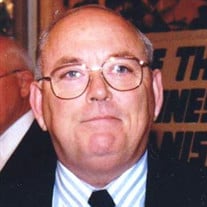 James L. Howser, 78, of Syracuse, passed away Monday, January 30th peacefully after a long illness at St. Camillus with his family at his side. He was born in Ithaca NY. He attended Solvay High School and Auburn Community College. He was an 8 year veteran of the US Air Force, serving in Oklahoma, Okinawa and California and was honorably discharged as SSGT in 1967. He was formally employed as a day operational manager at Janitor Service Inc. and later as regional manager for Finger Lakes Janitorial Services Inc. In retirement he enjoyed watching all sports including the Cleveland Browns, traveling with his wife on cruises and Kiwanis conventions in the US and abroad. Jim was a 30 year member of the Solvay-Geddes- Camillus Kiwanis Club as president, board member and several committees. He was predeceased by his parents Ruth and Leon Howser. He is survived by his loving wife of 56 years, Mary Diane, daughters; Elizabeth (David) Bergstraesser, Susan (Richard) Suatoni, Mary (Kippen) Richer and son; Michael, sister; Linda (Richard) Cunningham, brothers-in-law; Steven (Willene) Behuniak, of Belvidere IL, and John (Cathy) Behuniak, of Syracuse, six grandchildren; Heather Barry, Sarah and Erin Bergstraesser, Luis and Evelyn Suatoni and Brynn Richer and several nieces and nephews. Calling hours will be Thursday Feb 2nd from 4-7 PM at BAGOZZI TWINS FUNERAL HOME, 2601 Milton Avenue, Solvay NY 13209. A private service at the funeral home will be followed by burial at Our Lady of Peace Cemetery on Friday Feb 3rd. In lieu of flowers, donations can be made to SGC Kiwanis Scholarship Fund in memory of Jim. Mail to: SGC Kiwanis in care of Lisa Mono, 119 Charles Ave, Syracuse, NY 13209 or St. Camillus Foundation, 813 Fay Rd, Syracuse, NY 13219. The family would like to extend their sincere appreciation to the nurses and support staff of C-Unit at St. Camillus for the care and compassion shown to Jim during his time at St. Camillus. Please offer online condolences at www.bagozzitwins.com.

James L. Howser, 78, of Syracuse, passed away Monday, January 30th peacefully after a long illness at St. Camillus with his family at his side. He was born in Ithaca NY. He attended Solvay High School and Auburn Community College. He was an... View Obituary & Service Information

The family of James L. Howser created this Life Tributes page to make it easy to share your memories.

Send flowers to the Howser family.