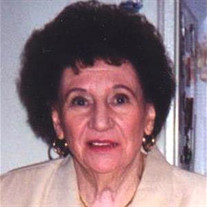 Helen (Makowski) Susco, of Lakeland went to be with her beloved husband in heaven on Sunday, January 8, 2017, surrounded by her loved ones. She was born in Solvay on March 14, 1924, to the late Ignatius and Mary (Briske) Makowski. She attended Solvay Schools. She married the love of her life, Nunzie, on December 13, 1941, and they celebrated 66 years together until his death in 2007. As a young married woman, she would take her children in a wagon or sleigh, depending on the weather, where she would go door-to-door selling AVON to her neighbors. She went on to work at E.W. Edwards Department Store in the city, taking the bus downtown each day from the corner of Lakeside Road. She worked at the Solvay Leather Company after finally getting her driver's license when her daughters were in high school. Besides driving to work, she spent many days behind the wheel taking them to their many school Activities. In later years, she worked at Hafner`s Vegetable Stand in Baldwinsville. Helen was one of the remaining founding members of the Lakeside Volunteer Fire Department Women's Auxiliary and spent most weekends in the summer marching at different fire department field days along with her husband who had served as Chief. She was a wonderful mother and a very caring grandmother. She was an avid reader. She enjoyed cooking and baking, especially making “stiff brownies” and animal-shaped pancakes for her grandchildren. She learned to make all the Italian specialty dishes her husband loved from her Italian mother-in-law. She treasured the relationship she had with her son-in-law Tony, who died in 2014. He was like the son she never had. Thank you to her wonderful caretakers--Angie, Rosemary, Maggie, and Vanessa--who treated her like family. Helen is survived by two daughters, Judith Dannible, of Liverpool and Kathryn Monahan, of Buffalo; five grandchildren, Christy Dannible, of Clay, Amy Dannible (Mark), of Liverpool, Thomas (Robert) Dannible, of Schenectady, Eric (Jill) Monahan and Mark (Deann) Monahan, of Buffalo, five great-grandchildren, Eva and Nicholas Bambace, Jaxson and Melina Dannible, and Breanna Monahan. Funeral services will be held 10 am Saturday, January 14, 2017 at BAGOZZI TWINS FUNERAL HOME, Solvay. Burial will follow in Belle Isle Cemetery, Camillus. Family and friends may call from 4 to 7 pm Friday, January 13, 2017 at BAGOZZI TWINS FUNERAL HOME, 2601 Milton Ave. Please offer online condolences at www.bagozzitwins.com.

Helen (Makowski) Susco, of Lakeland went to be with her beloved husband in heaven on Sunday, January 8, 2017, surrounded by her loved ones. She was born in Solvay on March 14, 1924, to the late Ignatius and Mary (Briske) Makowski. She attended... View Obituary & Service Information

The family of Helen (Makowski) Susco created this Life Tributes page to make it easy to share your memories.

Helen (Makowski) Susco, of Lakeland went to be with her beloved...

Send flowers to the Susco family.