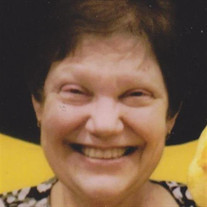 Evelyn H. (Paolangeli) Tamela, 64, of Syracuse, passed away Monday, June 19, 2017 at home following a gallant battle with cancer. Surviving are her only child, Souleymane Tamla, of Washington, D.C.; mother, Patricia C. Cargill, of Endicott; father, Roger E. Paolangeli, of Las Vegas, NV; siblings Kathleen (John) Francis, of Lodi, NY; Beth (Marty) Conrow, Myrtle Beach, SC; Joseph Paolangeli of Tolland, CT.; and Paul Paolangeli, Endicott, NY. She is also survived by many nieces and nephews, and her beloved cats and dog. Eve was born in Ithaca, grew up mostly in Endicott, and attended Catholic schools. Her college degrees were from Oneonta (B.S.) where she received a fellowship, Michigan State (two M.S. degrees, in Textiles and in African Studies), Columbia (M.S. in Public Health), Virginia Tech. (M.S. in Housing Resources), and SUNY-Cortland (M.S. in Education and a Teaching Certificate in ESL). Eve served three years in the Peace Corps, assisting women and children with health concerns in the bush in Senegal. She worked for Planned Parenthood in both NYC and in Bangkok, Thailand, followed by administering health programs in Bamako, Mali, on grants from U.S.A.I.D. In Syracuse, InterFaith Works hired Eve to teach ESL. She had great understanding for her students’ difficulties, having lived in many other cultures and learned their languages. She also studied and became certified as a Master Gardener. She has rescued many cats desperate for homes, preferring Manx, nursing them back to good health. Women Transcending Boundaries was of great interest to Eve. She was an active member and, most recently, treasurer. We will miss her calm, her patience, her knowledge and understanding of other cultures and their food, and her endless interest in continuing to learn. Please offer your memories of Eve at www.bagozzitwins.com A celebration of Eve’s life will be held later at the convenience of the family. BAGOZZI TWINS FUNERAL HOME has care of arrangements.

The family of EVELYN "EVE" (PAOLANGELI) TAMELA created this Life Tributes page to make it easy to share your memories.

Send flowers to the TAMELA family.