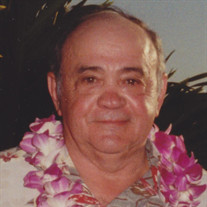 Carmen R. Demperio, 85, of Geddes, passed away Friday, January 6, 2017 at Loretto. He was born in Syracuse to the late Carmine and Margaret (Rinaldo) D’Imperio in 1931. He was a US Air Force Veteran, serving from 1951-1955. He was a plumber for over 40 years, working with the Plumbers Union and New Process Gear before retiring. Carmen was a member of the Solvay-Geddes Veteran’s Association, Stanley B. Pennock VFW Post 2893, Solvay Tigers AC and UAW Local 624. He was predeceased by his daughter, Veronica Zappala in 2011, brother, Raymond and sister, Ida Libertone. He is survived by his son; Carmen Jr. (Jeanne), of Solvay, 2 daughters; Cheryl Demperio, of Solvay and Susan (Walter) Gonzalski, of Fairmount, 8 grandchildren, 7 great-grandchildren, half-brother; Frank D’Imperio, of Liverpool, half-sister; Maria D’Imperio, of Canastota and many nieces and nephews. Funeral services will be conducted 9:30 am Monday, January 9, 2017 at BAGOZZI TWINS FUNERAL HOME. The Rite of Committal and burial will follow in Greenlawn Memorial Park, Warners. Family and friends may call from 1 to 4 pm Sunday, January 8, 2017 at BAGOZZI TWINS FUNERAL HOME, 2601 Milton Ave., Solvay. Contributions may be made in his memory to the SPCA, 5873 E. Molloy Rd., Syracuse, NY 13211. Please offer online condolences at www.bagozzitwins.com.

The family of Carmen R. Demperio created this Life Tributes page to make it easy to share your memories.

Send flowers to the Demperio family.