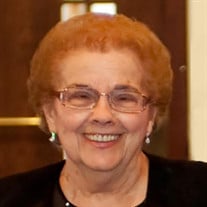 Anna M. (Cefaratti) Lotito, 99, of Solvay, passed away peacefully surrounded by her family Wednesday, February 16, 2022 at Crouse Hospital in Syracuse. Born on Thanksgiving Day, November 30, 1922 to the late Nicola and Carmella (Pietrantone) Cefaratti, she was a lifelong resident of Solvay. After graduating from Solvay High School, Anna went on to work at Pass & Seymour, the Navy Department and then the Veterans Administration from where she retired in 1986. Anna was married to the love of her life, John D. Lotito on March 2, 1946 until his death in 1991. She was a wonderful wife, mother, grandmother and great grandmother who enjoyed nothing more than spending time with her family and friends. She also enjoyed attending activities that her children, grandchildren and great grandchildren participated in such as piano recitals, soccer, softball, baseball and hockey games. She was a Buffalo Sabres and Los Angeles Kings fan and was thrilled when she was invited to spend the day in Ithaca with the Stanley Cup in 2012 and 2014. She loved to travel, visiting Italy four times, Alaska and states up and down the east coast. She was also a self-taught pianist who enjoyed playing songs she loved. Anna loved her Lord and Savior and was a past member of First Christian Assembly Church, Grace Assembly of God and Trinity Baptist Church. Besides her husband and parents, Anna was predeceased by her two brothers, John and Nick Cefaratti and her sisters, Josephine (Fred) Paventi, Theresa (Michael) D’Anna, Rose (Edward) Musengo, Lydia (Lawrence) Bella and a nephew, Edward John Musengo. She is survived by her children, John (Karen) Lotito, of Lakeland and Suzanne Lotito, of Milan, Italy; 2 grandchildren, Nicholas Lotito, of Solvay and Ashley (William) Kingdollar, of Clarksville, Tennessee; 6 great grandchildren, John, Lyla, Emma and Anna Lotito and Liam and Luke Kingdollar; sister, Leah (Paul) Moth, of Solvay and sister-in-law, Eleanor Tarolli Cefaratti, of Florida; 10 nieces and nephews and their families. The family would like to extend a sincere thank you to the outstanding staff of 4 South at Crouse Hospital. Family and friends may call from 4:00–6:00 pm Tuesday, February 22nd at BAGOZZI TWINS FUNERAL, 2601 Milton Ave, Solvay. Funeral services will be held 10:00 AM Wednesday February 23rd at BAGOZZI TWINS FUNERAL HOME. Burial will follow in White Chapel Memory Gardens, DeWitt. Donations in lieu of flowers may be made to Solvay Fire Dept., Solvay Police PBA or Geddes Police PBA, P.O.Box 123, Solvay, NY 13209. Please share online memories and tributes at www.bagozzitwins.com.

The family of ANNA (CEFARATTI) LOTITO created this Life Tributes page to make it easy to share your memories.

Send flowers to the LOTITO family.