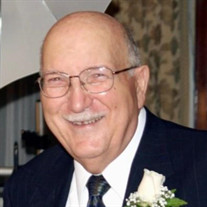 Alfred “Al” Joseph Emmi Sr., 89, of Solvay, passed peacefully to heaven in the company of his only son and “favorite” daughter-in-law on November 26, 2021. Alfred was born in Solvay, NY on February 1st, 1932 and spent all of his childhood in Solvay, moving to Fairmount, Camillus, Mt. Holly, NJ, back to Solvay, and finally Huntsville, Alabama to be near his son. After a four year stint in the U.S Navy, serving aboard the aircraft carrier U.S.S. Coral Sea with his brother during the Korean Conflict, he returned to Solvay where he graduated from Le Moyne College in 1960 with a Bachelor’s of Science in Pure Sciences. Soon after, he met the love of his life, Concetta A. DiDominico, and they started a family. Al worked as a U.S Government Civil Servant with the U.S. Air Force for 34 years, first at Hancock Air Force Base, Syracuse, NY, and retiring in 1992 as the Budget Chief for all of McGuire Air Force Base, NJ. Not being one to ideally sit around, he continued working part time in the men’s department at Lord & Taylor’s Department store at Destiny Mall, Syracuse, where he was beloved by the staff. Al was predeceased by his parents, his wife, Concetta, and his beloved daughters, Ann Marie Bick (Stonecypher) and Kathleen Emmi-Brown. Al enjoyed reading Louis L’Amour westerns, listening to big bands and swing, gardening, and baking holiday cookies for family and friends. He is survived by his son, Al Jr. and his wife Ana Maria Clare-Emmi, his loving brother, Joe Emmi and his wife Carole, several grandchildren, two great-grandchildren, nephews, and nieces. Family and friends may call from 5:00 pm to 7:00 pm on Thursday, December 2nd at BAGOZZI TWINS FUNERAL HOME, 2601 Milton Avenue. A Mass of Christian Burial will be celebrated 9:30 am Friday, December 3rd at St. Marianne Cope Parish - St. Cecilia Church, 1001 Woods Rd. The Rite of Committal and burial will follow in St. Mary’s Cemetery, DeWitt. In lieu of flowers, donations may be made in his memory to St. Marianne Cope Parish-St. Cecilia’s Food Pantry, 105 Stanton Ave, Solvay, NY 13209. Please share online memories and tributes at www.bagozzitwins.com.

The family of ALFRED J. EMMI SR. created this Life Tributes page to make it easy to share your memories.

Send flowers to the EMMI family.