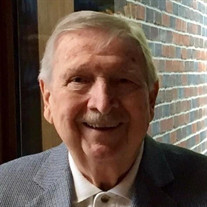 Albert Louis Salvagno, 89, passed away on October12, 2021 at St. Joseph’s Hospital. Albert was one of the original proud Solvay residents; born on August 13, 1932 at 225 William Street to August and Elizabeth (Maestri) Salvagno. He resided on William Street with his Cavedine-Maestri-Salvagno family until he returned from military service. His family operated the Flying A Solvay Super Service Station next to the old Solvay Process Stone pile. He was employed by the Village of Solvay Electric Department prior to his military service. Al was an Army veteran of the Korean War. Returning from military service, he continued his education by enrolling in 1956 at LeMoyne College and graduated with a degree in accounting in 1960. He was employed by the Department of Defense, Contract Auditing Agency, stationed at the Syracuse GE plant, retiring as office supervisor after 30 years. Albert was proud that he graduated from LeMoyne College and he was very pleased that his children, daughter-in-law and 2 granddaughters also did, each in different fields. Albert was the patriarch of the Salvagno family. He enjoyed telling everyone about the genealogy of the family as well as of those of the Solvay residents who possess Trentino heritage. He was a member and served on the board of the Solvay Tyrol Club. He was also a member of the Fineview Homeowners’ Association, as well as a member of the Solvay-Geddes Veterans. He was a communicant of St. Cecilia’s Church. Albert loved his family and believed that everyone needed a place to get away to. Al chose Wellesley Island on the mighty St. Lawrence River as his family’s getaway place. Starting with a camper, and slowly with help from family, he built homes on the island so that every one of his children would have a place to get away to. He was especially proud of what his two sons are doing to ensure that this will always be a place called home for the Salvagno family. He is survived by his wife of 62 years, Sylvia (Poletti) Salvagno, his two sons, John (Annette), of St. Charles MO, and Daniel (Elizabeth), of Solvay, NY. His five grandchildren, Joseph (Catherine), Lauren, Dr. Richard (Andrea), Anna and John Salvagno, and his great granddaughter, Nora Louise Sweet Salvagno. He was predeceased by his sister Josephine Pikarsky and his beloved daughter Elizabeth Ann Salvagno. Family and friends may call from 1:00-3:00 pm Saturday October 16th at BAGOZZI TWINS FUNERAL HOME, 2601 Milton Ave, Solvay with memorial services immediately following at 3:00 pm. The family requests that all attending wear a mask. Interment in Assumption Cemetery will be private. Albert requested no flowers. They are beautiful, so plant one for him near your home. Additionally, donations to the Ronald McDonald House or a charity of your choice can be made in honor of him. But, most of all, do something nice for a family member or friend.

Albert Louis Salvagno, 89, passed away on October12, 2021 at St. Joseph&#8217;s Hospital. Albert was one of the original proud Solvay residents; born on August 13, 1932 at 225 William Street to August and Elizabeth (Maestri) Salvagno. He resided... View Obituary & Service Information

The family of ALBERT L. SALVAGNO created this Life Tributes page to make it easy to share your memories.

Send flowers to the SALVAGNO family.